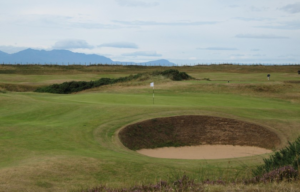 The history of Prestwick Golf Club (sometimes referred to as ‘Old Prestwick’) stretches back over 160 years to a time when golf was in its infancy. In 1851, a group of 57 enthusiastic members, who met regularly at the Red Lion Inn, made the momentous decision to form a golf club purchasing two cottages opposite the tavern.  The first cottage would become the members’ clubhouse whilst the other was gifted to the club’s Keeper of the Green, ball and clubmaker – Old Tom Morris. Together with a gold medal presented by the club’s first captain (the Earl of Eglinton) for an annual competition still played for today, the legend of Prestwick was born.

The birthplace of the Open Championship is what this amazing golf course boasts and a simple stone cairn to the west of Prestwick’s clubhouse marks the spot where the first Open Championship tee shot was struck in 1860. It identifies the opening hole of the original 12-hole course and the place where modern golfing history began.  Prestwick presided over the first 12 Open Championships, which was then held jointly with The Royal and Ancient Golf Club of St Andrews and The Honourable Company of Edinburgh Golfers. Prestwick went on to host 24 Open Championships with the last being held in 1925 when Jim Barnes from the US secured the first prize of £75. Only the Old Course at St Andrews has hosted more Open Championships than Prestwick…..

Below are some of what I consider the feature holes of an amazing test of golf.

The 1st hole – Railway – Par 4 –  is one of the most famous opening holes in golf and sets the tone for the course, with an out-of-bounds wall running down the right-hand side from tee to green. You need to hit 160 yards to reach the fairway. Around 200 yards will leave a short iron to the green, favour the right side of the fairway for an easier second shot.

The 5th hole  – Himalayas – Par 3 – this is a world famous blind par three. It is crucial to aim at the disc on the hill that matches the tee you are playing from, and make sure you take enough club to match the distance. It is a testing shot especially as the prevailing winds will push you towards five bunkers on the left side of the green. The green slopes back to front, so leaving it short will give you an uphill putt. 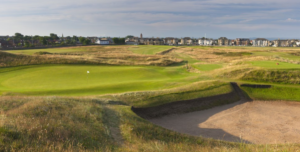 My favourite hole – the 17th – Alps – Par 4 – is a real treat – it’s the original 2nd hole from 1851 and the oldest existing hole in championship golf. The narrow fairway requires an accurate tee shot to allow the best chance of reaching the green in two. The blind second shot plays every inch of the yardage. Falling short will mean playing from the famous Sahara bunker. Check the tee box as this will indicate pin positions that you can then correspond to the markers on top of the Alps.

It’s a fantastic experience to play golf at the birthplace of the Open Championship and you shouldn’t leave without taking in all of the historical memorabilia housed within the stunning clubhouse.